Here’s What the Internet Has to Say About Miss Universe

Last December, the whole world gathered around the nearest screen — whether it be a smartphone, a computer, or a TV — for Miss Universe 2018. Bets were made, emails went unanswered, and beauty parlors paused business as we watched 94 beauty queens from all over the globe charm their way to the title of Miss Universe.

But at AdSpark, we believe in the idea of working while playing — or playing while working. During pageant night, we waded through various online channels to hear just what the world has to say about the competition.

That’s not a feat you can accomplish on your own, which is why we made use of AdSpark Intelligence. AdSpark Intelligence is our proprietary suite of listening and intelligence tools, which allows us to listen in on what netizens are talking about, how they feel, and where they’re coming from, geographically or digitally — all this in real time, ensuring that we never missed a critical moment during pageant night.

Here’s what we’ve learned from the hundreds of thousands of social media posts about Miss Universe 2018:

1. The Philippines is a social media juggernaut.

For the third year in a row, the Philippines has been declared the social media capital of the world, with the average Filipino spending more time on social media than any other group. 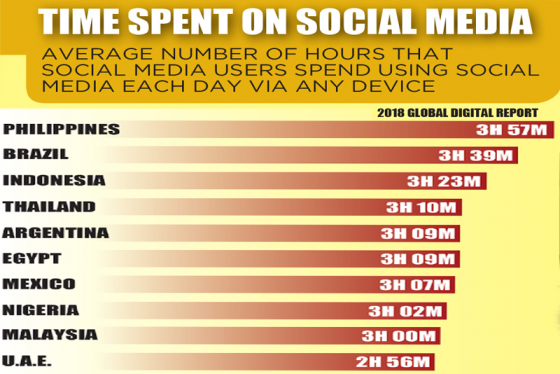 Combine that with our country’s obsession with the pageant circuit, and you have the components for the perfect social media storm. And for this year’s Miss Universe, the Philippines really turned it out, with 34% of the social media buzz coming from Pinoys at 8:45 AM PHT, minutes before the pageant night even began — the most for any country watching the beauty pageant this year. 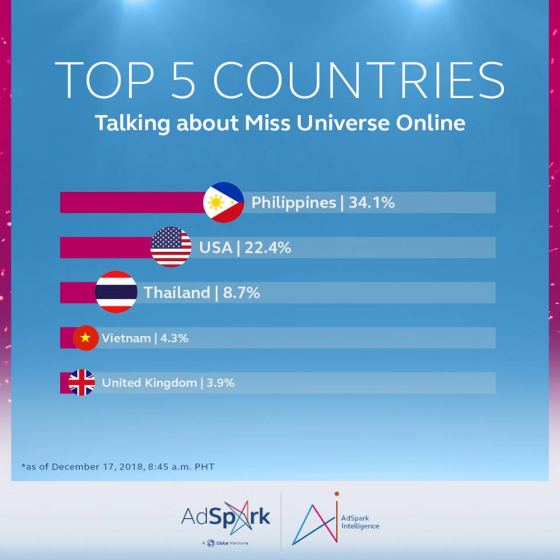 But as Pinoys are known for their big hearts, there’s plenty of love to go around. According to AdSpark Intelligence, while Miss Philippines Catriona Gray is the obvious fan favorite, Filipinos also rallied behind beauty queens from other countries, such as Miss South Africa and Miss Vietnam, based on the number of social media users discussing each beauty queen.

In fact, more social media users from the Philippines voiced their support for any of the Top 3 finalists than any other country, with more than 2,000 users talking about all 3 finalists. Compare that to the United States, the second noisiest country during the programme, with only a little more than 500 users making noise during the Finals segment (approximately 10:45 AM PHT).

All that social media chatter for the Philippines definitely paid off, as Ms. Gray was declared Miss Universe 2018 — the 4th Miss Universe Philippines to win the crown after Gloria Diaz (1969), Margie Moran (1973), and Pia Wurtzbach (2015).

Netizens have a knack for acting like know-it-alls, but in the case of the Miss Universe pageant, they have a right to do so.

During the Top 20 segment, AdSpark Intelligence analyzed 168,040 social media mentions of the relevant keywords such as “Miss Universe” and “bets” from 9:10 AM to 9:25 AM PHT, immediately after the Top 20 announcement.

Armed with this information, AdSpark Intelligence was able to pick out the 5 queens with the most social media buzz as fan favorites to enter the Top 10 approximately 20 minutes before the announcement. And sure enough, the internet pulled through: all 5 social media favorites made it through the next stage of the competition. 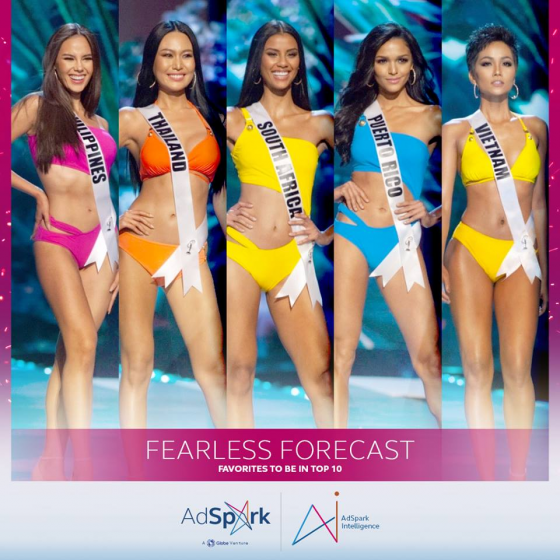 Not only that, 4 out of 5 of these social media favorites made their way to the Top 5, with the dark horse of the competition being Miss Venezuela Sthefany Gutiérrez.

After the announcement, Ms. Gutiérrez was quick to become the subject of social media chatter, being the second most-discussed Top 5 Finalist after Ms. Gray, with Miss South Africa Tamaryn Green being the third most-discussed — and all 3 queens proceeding to the final stage of the competition.

But here’s where it gets exciting: after the Final Q&A round and before the announcement of winners, the tides began to turn in Ms. Green’s favor; while Ms. Gray was still the most-discussed (and most positively regarded) finalist, Ms. Green’s Twitter mentions swiftly outnumbered that of Ms. Gutiérrez’. 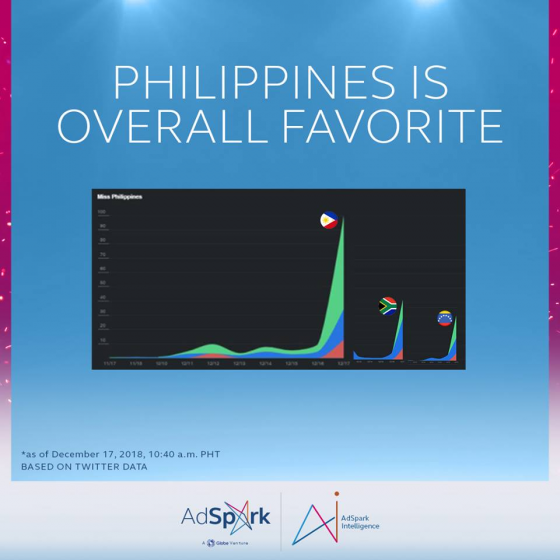 And the rest, as you know, is history: Miss South Africa and Miss Venezuela placed first and second runner-up in the competition, respectively, teaching us all not to underestimate the netizen’s keen eye for pageantry.

3. The transgender community still has a long way to go.

In 2012, the transgender rights movement bagged a win when the Miss Universe Organization changed their rules to allow trans women to join their competition; but it wasn’t until 6 years later that the pageant saw an openly transgender contestant compete against 93 other beauty queens for the title of Miss Universe.

The future of the trans community looks bright, and the data seems to agree. According to a global study by market research firm Ipsos, people are now more accepting of transgender people, with only 25% saying that society has gone too far by allowing transgender people to dress and live as they choose. 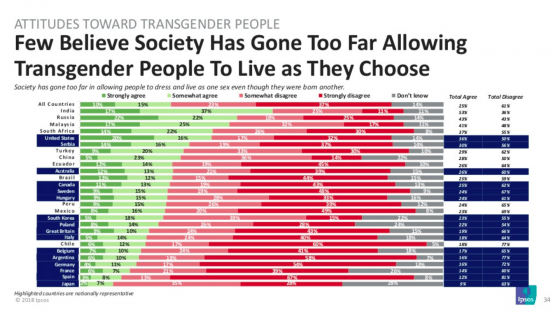 However, the audience’s reception towards Angela Ponce (Miss Spain, and the pageant’s first openly transgender contestant) paints a different picture. 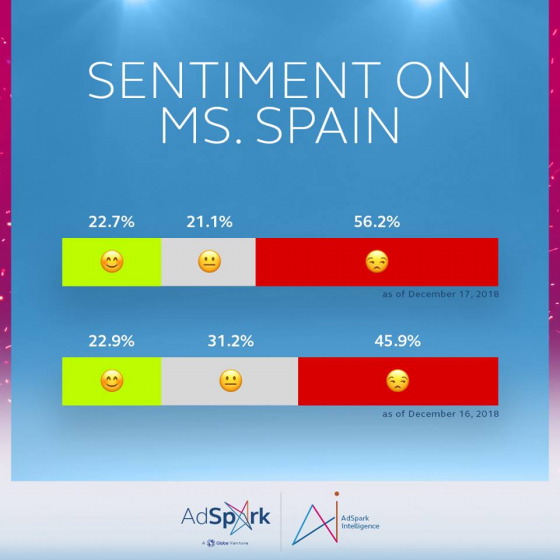 In spite of this, Miss Spain has seen no shortage of love and support from the audience and from her fellow beauty queens. At the end of the day, a trans woman finally competing in Miss Universe after 65 years is already a big step for the transgender community.

As Ms. Ponce herself said, “I don’t need to win Miss Universe. I only need to be here.”

We’re inclined to agree: the conversations people are having about the transgender community, the beauty pageant industry, or any brand, really, are important if we want to keep a pulse on what matters and what doesn’t to our consumers.

If you want to learn more about AdSpark Intelligence and how it can help your brand’s digital marketing strategy, contact us at https://adspark.ph/contact-us or info@adspark.ph.