Guerrilla Marketing is Alive and Well in the Digital Age

Guerrilla marketing isn’t dead. Its traditional version might have taken a backseat when newer marketing trends came up, but it never died and honestly, it never will. Why? It’s highly creative, cost-effective and, when done right, yields mind-blowing results.

The term “guerrilla marketing” was coined and founded by Jay Conrad Levinson in the 80’s, at the tailend of the Mad Men era when campaigns were no longer exciting consumers. And this was despite the rise of radio and TV media. What could have gone wrong?

Well, for one, people were clearly desensitized and likely were aching to hear, see and feel something different. Levinson saw opportunity in that challenge. The world needed something unique, something clever and maybe even something so outrageous that it will shock you to your core (we’re exaggerating a little, but you know what we mean). Enter: the Marlboro Man, United’s Friendly Skies and the Jolly Green Giant.

Effective, unconventional and full of energy, the strategy wasn’t anymore limited to traditional channels or brands. Producers started using just as clever guerrilla marketing tactics for movies, like The Blair Witch Project. The movie was a huge success despite its small budget. But what they did right was this: they created a campaign that involved rumor-mongering about the urban legend of the Blair Witch and then put up a standalone website where discussions were held about a movie that hadn’t even been finished. The result was phenomenal and the movie grossed over $248M worldwide and gave rise to a new genre of film called found footage.

Today, guerrilla marketing in the digital age has evolved in more ways than one can imagine. Remember those Bird Box memes? Hilarious weren’t they? Perhaps you were even tempted to check out the film just to “get” them.

Little do people know, the meme-ified salient image of a blindfolded Sandra Bullock was pretty much what made the Netflix movie a huge success. The jury’s still out on whether or not Netflix planted some of those memes themselves, but the fact is, those memes were too funny to ignore and we’ve never seen a psychological thriller quite like Bird Box.

Me pretending to see none of these bird box memes… pic.twitter.com/5iA7FAIe6Q

Always, yes, the feminine hygiene product, is another testament to the combined powers of guerrilla marketing and social media. Their campaign #LikeAGirl (also seen on Facebook, Twitter and YouTube; launched in 2015 but is still relevant today) flipped negative connotations behind and around the phrase, and turned it into something positive. Click on the hashtag on social media and among the first few things you’ll see is a post that defines what ‘like a girl’ means: “breaking through glass ceilings and overcoming old ideas about gender limitations.” To this day, it continues to spawn millions of user-generated content.

Brands also have the option to do something less obvious and in-your-face. Who could forget Burger King’s breakfast breakup post in 2017? Genuine or brand-generated, it still got our attention. 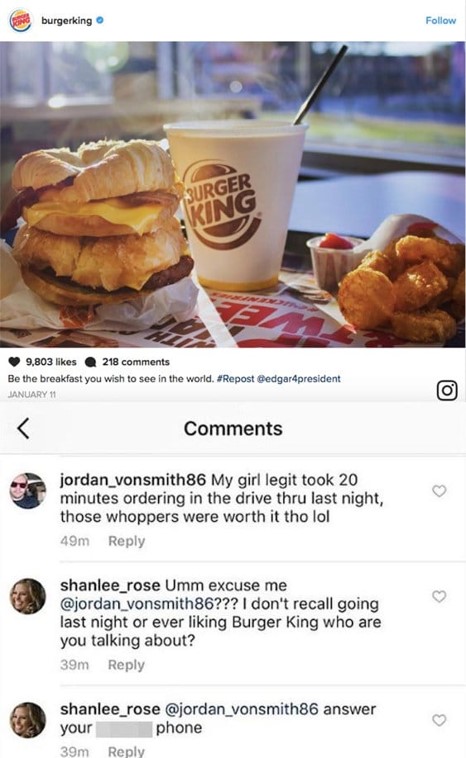 Real Talk: The Sky’s The Limit

In guerrilla marketing, the only limit is one’s imagination, really. It’s about taking a consumer by surprise and ingraining an experience or memory into their minds that create a strong impression—strong enough to get the world of social media hyped up and buzzing. Its efficacy lies in knowing what to do with the data you have, a brand’s ability to engage with its followers, knowing who they are, what they like, etc., and knowing which channel/s work best for you.

AdSpark Intelligence uses both conversation and consumption data to paint a complete picture of your audience, their interests, and their preferred channels of engagement, which you can use from insighting, to ideation and campaign implementation. You can read more about AdSpark Intelligence on our blog and social media (Twitter and Facebook), or by contacting us through our website or email.