Our Favorite Campaigns of 2018

There is no use denying that 2018 has been a year of ups and downs and hits and misses. We’ve revelled in the success of people, groups and companies and angered ourselves due to the insensitivity and ignorance of others. But as we bid the year goodbye, there really is no point in focusing on the negative; it’s onwards and upwards as we celebrate our favorite campaigns of 2018.

Several memorable ones come to mind, but there are choice campaigns that have really made an impact, not just in terms of thematic but in effectivity as well. These are the ads, commercials and projects that have embedded themselves to memory, despite the surplus of content available.

Bench’s How Long Can You Keep A Secret? campaign reminds us of a father’s love

Despite the world growing more and more accepting of different sexualities, orientations and everything in between, it can still be a scary place. And since we live in a country that’s still largely traditional, this fear can sometimes come two fold for our fellow Filipinos that are struggling to either come to terms with themselves or let others in on who they are—even if these people are family.

What Bench reminded us of with How Long Can You Keep A Secret? is that there is no hiding who we are and there is no running away from it. But perhaps more importantly, it teaches us that love is acceptance even when we don’t ask for it. Bench’s message of openness resonated all around the world, with people from various countries sharing their own stories as members of the LGBT community.

Jollibee’s solidified itself both locally and internationally as a brand that knows how to tug at our heartstrings, and with the launch of Jollibee Studios, they made sure that the tears and the laughter are flowing nonstop.

In Biyahe, the fast food chain points the camera towards our elderly who just don’t seem to tire despite aching bones and aging faces. While their hearing gets weaker, their hearts never falter.

Life is tough, but the people that surround us tend to make things easier. Whether that means giving us something to laugh about or helping cover things we’re just unable to, breathing becomes a little easier with them around.

Uber’s Valentine Day’s message is all about building relationships

2018 was a big year for Uber, with thousands of users from Southeast Asia saddened by the announcement that the company would be packing up its office in the region. But while we remember their service, let’s not forget their brilliant email marketing campaigns.

Uber uses a language that is specific to the locality they are servicing, injecting specific lingo and casual conversation into their brief emails. Take for example their Valentine’s day campaign, which the company made sure would cater to both their single and in-a-relationship markets. 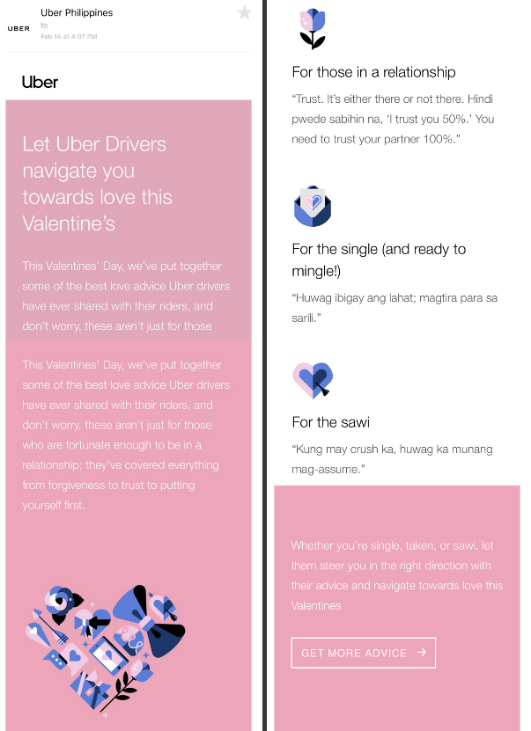 The ride-hailing company definitely knows how to humanize its brand, but perhaps more importantly, its persona is one that is approachable. Uber may not be heavy on commercials and billboard placements, but they sure aced their email marketing.

Filipinos take #FakeNews into their own hands

In 2017, Collins Dictionary dubbed “fake news” its word of the year, but the phenomena, it seems, did not end that year.

With Free Facebook, Filipinos were able to browse the social networking site without incurring charges on their SIM card, with one caveat: the browsing experience is limited to plain text. Photos, videos, and external links cannot be viewed without switching to Facebook’s data mode.

As a result, it has become harder than usual to assess the accuracy and reliability of news shared on the social media platform — users of Free Facebook have no choice but to take any Facebook post, caption, and headline at face value. That, or they have to use their mobile data.

Facebook user Miko Santos decided to take matters into his own hands by creating a chatbot that acts as a search engine within Facebook Messenger. Just type in a search query, and the chatbot returns with results from the first page.

And the best part? No photos, no videos, no links; just good old simple text that anyone can access with or without mobile data credits.

While not a marketing campaign, Free Web Search is too good not to include in this list. This small chatbot is a testament to the Filipino’s curiosity and ingenuity. As the old saying goes, “kung ayaw, may dahilan; kung gusto, may paraan.”

In 2017 alone, the Philippines saw a 75% increase in page views for illegal online streaming sites compared to the previous year. Suffice to say, the Philippines has a piracy problem — but not if Globe can do anything about it.

Alongside video content providers HOOQ and VIU, as well as the Optical Media Board and Film Development Council of the Philippines, Globe launched #PlayItRight 3 years ago, which sought to combat online piracy in the country.

For last year’s Metro Manila Film Festival, Globe infiltrated enemy lines with its Torrents Against Torrents campaign. Instead of trying to curb online piracy, Globe themselves uploaded the torrent files of the entries to the 2017 MMFF. However, a surprise awaited would-be movie viewers when they tried to watch the pirated film. 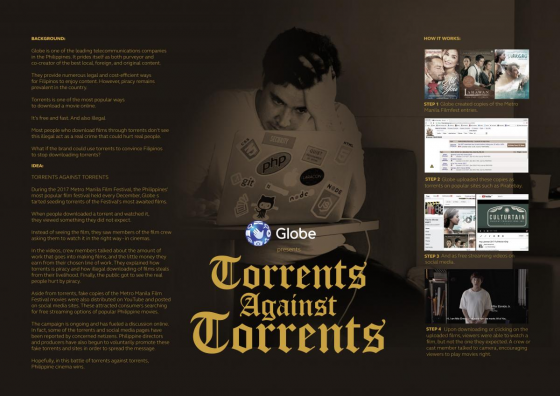 Instead of All of You, Siargao, or whatever movie they were expecting, torrenters were treated to footage of the cast and crew talking about how piracy has affected their job.

The campaign was viewed by over 500,000 torrenters, created over 2 million media impressions, and was shortlisted for both Spikes Asia Awards and Boomerang Awards — all on a zero media budget. No wonder Globe has extended this campaign for one more year.

BeautyMNL’s persistence is unlike any other

There is probably no greater weapon in marketing than knowing your audience and thereby knowing how to get them to engage—and it is in this aspect that BeautyMNL shines. The brand is able to pick up its users’ behavior and particular preferences and knows how to market its varied array of products.

Daily emails are sent out to thousands of individuals that have signed up to notify them of new items and restocks. In this sense, persistence can sometimes become an annoyance, but BeautyMNL fixes this would-be error by keeping each blast unique. Furthermore, it knows its audience’s largest pain point: price—which is why every sale, announced via email, is so successful.

No marketing campaign is the same, and its different forms work differently for different brands. Each method is distinctive and has its pros and cons. Which format to use (and which would be most effective) relies primarily on the end goal.

If you want your brand to be more personable and approachable, develop an email marketing campaign. Alternatively, using social media is your biggest chance at becoming more visible to people outside of your current audience. Investing in commercials and videos, on the other hand, allow you to convey a message in a much larger setting.

Constant innovation, however, ensures that we never run out of new ways and channels to reach our target audiences. Read our retrospective on the 2018 digital marketing predictions to see this year’s hits and misses.